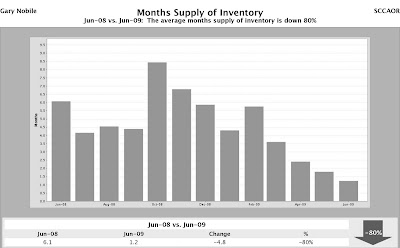 Cambrian Home Prices Poised to Shift (San Jose). There is a very popular area of San Jose referred to as the Cambrian area. It’s a nice part of San Jose with many retail options and it’s still somewhat affordable. That may be changing. I find that most people who do not live in Cambrian have heard much about it but aren’t quite sure where it is. Here’s some help. Geographically, the boundaries are roughly Foxworthy (northern) Highway 17 (western) Almaden Road (southern) and Almaden Expressway (eastern). It’s surrounded by Willow Glen, Campbell, Los Gatos, and Almaden. Based on the info I’m seeing, homes available for sale are down. WAY down. Down 80% to be exact. One of the metrics I follow is “Months of Inventory”. To clarify, Months of Inventory measures how many months it would take to sell all of the existing homes for sale. For example, if an area has 600 homes for sale and they are selling at a rate of 100 per month, there would be six months worth of inventory available for sale. A Months of Inventory number greater than six months is a buyer’s market, less than six months is a seller’s market. There’s rarely ever equilibrium because that only takes place as a rather brief period between a shift in the market. As I’ve been sharing for several months now, we are now in a seller’s market. Ready? The Months of Inventory in the Cambrian area are down to less than 2 months! Get prepared because prices rise when more buyers are chasing fewer in demand homes. Just like supply and demand for any other product. http://www.garynobile.com/