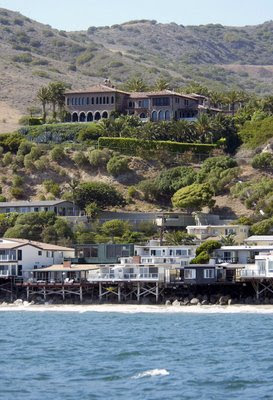 Cher’s Malibu Mansion is back on the Market, Price Reduced. Extending approximately 1.7 acres and overlooking the Pacific Ocean, the three-story, 14,000-square-foot beach estate comes complete with six bedrooms, seven bathrooms, a theater, a gym, multiple verandas, a tennis court and a pool. Not bad for a gal that got started singing “I Got You Babe”.
The home, which she built in 1992, used to house her collection of English Gothic Revival antiques, which she auctioned off about three years ago. Personally, I think keeping them would have added to the mystique of the home. She might have considered offering a package deal to include them as personal property. It certainly could have caused more buyers to come in and take a look. Then again, I suppose not every beach estate buyer appreciates the whole Goth thing.
According to the Mercury News, last year Cher had this beach palace listed for $45 million. Apparently, there were no takers so she remodeled and dropped the price to $41 million. Sounds like a steal to me, but then again, Cher won’t be roughing it anytime soon.
In 2006, she bought a condo in Los Angeles and that same year sold a bayfront house in Key Biscayne, Florida, for $8.8 million, just before the collapse of the Florida condo market. Looks like Donald Trump has some competition. Oh, and in case you weren't sure, that's her place atop the bluff. www.GaryNobile.com
Posted by Gary Nobile, Realtor, MBA at 8:40 AM