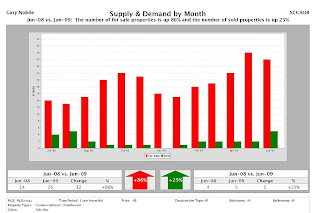 Palo Alto Townhouses a Bit Sluggish.
After conducting some research for a client in Palo Alto, an interesting phenomenon surfaced. Palo Alto townhouses seem to be having a surplus of demand (shown in red) compared to demand (shown in green) than some other market segments in our area. The data suggests that while more properties are selling, an even greater number are being put on the market. This is a change from many other areas of Santa Clara County the past couple of months. Understanding the why is what’s important most consumers. From what we’ve been able to observe, we believe that people are opting out of the Palo Alto Townhomes and are trading to single family homes that have come down significantly in price. Palo Alto has always been a desirable area to own real estate and that hasn’t changed. I was recently working with a developer not long ago who had built a magnificent home in Palo Alto only to learn that it wasn’t quite worth what he thought it would be. He dropped his price from $4.2 million to $3.2 million, and that’s nothing to sneeze at. The townhouse market is not nearly as expensive in most cases. However, an $800k townhouse in Palo Alto will translate into a pretty nice single family home in a lot of areas in Silicon Valley right now. And the single family homes won't have HOA dues and generally will include a more spacious yard. The point for sellers in this segment is to make sure they price their home spot on, or it will sit and won’t sell. The point for buyers in this space is that you’re in the driver’s seat. Want a larger view and more graphics? Drop me an e-mail. www.GaryNobile.com
Posted by Gary Nobile, Realtor, MBA at 8:01 AM